LOVE AND RAGE // A photography book offering a glimpse into a year of my life documenting the Occupy Wall Street movement. Tracie Williams // Photographer

To fully understand something you have to live it and breathe it. I guess you could say I have been in the trenches for the past year, physically battered and mentally bruised. I’ve seen things and met people that have altered my way of thinking and opened my mind exponentially. I’ve smashed a few flashes, been run over by fleeing mobs, struck by police batons, slept on cardboard to diffuse the cold concrete, surfed couches, rode on day long over-packed bus journeys, marched through torrential rains and sweltering temperatures, and even found myself arrested.

“Love and Rage” is a photographic book that chronicles this unique period of US history; from protests and civil disobedience to the more personal moments, conversations, and comradery that erupted in communities across the country.

Due to crazy expensive costs associated with independent self-pulbishing, I have launched a Kickstarter campaign to get this project off the ground! 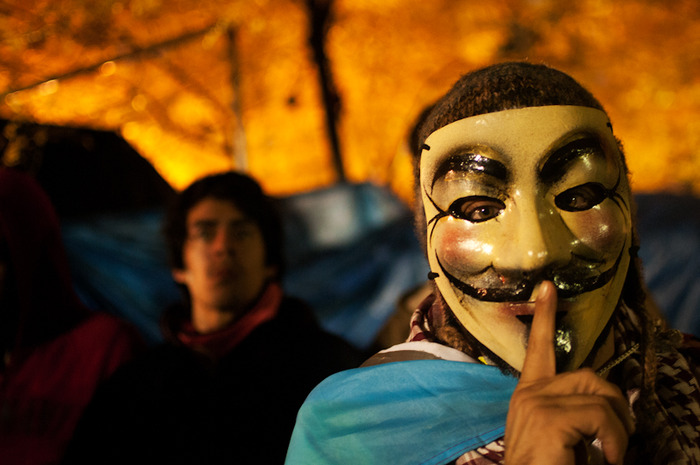 Despite instability and hardships I persevered. I believe in this project, but I can’t do this without you.

Thanks for your time and support.

*Tracie Willliams was an active member of both the Photo and Media Working Groups that originated in Zucotti Park – NYC. She is also an active photo contributor to Occupy Sandy related efforts.

We are an independent, ad-free, all volunteer communications working group that has served the burgeoning grassroots movement for social justice every day for the past four years, and we're asking for your support.

Our organization is special because we make it our priority to build communications infrastructure where there is none. Our focus is to help build power through connecting and coordinating the massive, spontaneous, and transformative energy that has erupted in the US since the advent of the Occupy Movement.

Interoccupy ( IO ) is proud of our unglamorous support of the movement. We're dedicated to the ongoing provision of free conference calls and websites to any grassroots group that needs them.

We do all of this with zero budget and an all volunteer crew. It is only possible with your support. We know it is likely you don’t have a lot to spare, but anything and everything helps. Please do your part today. It takes just a couple of minutes to make sure that Interoccupy.net is there for you and everybody else in 2016.

Here are some highlights of where we’ve been effective in providing infrastructure to the movement:

In 2015, IO tech assistants were called upon to assist on racial and social justice maestro calls for other groups.  We have helped tech and train new maestro tech assitants for SURJ, Ferguson Action Network, grassroots Bernie organizing groups.  Trainings are still free.  We ask trainees to pay this free skill forward by teching at least one call for a group other than their own. We provide an email list and call spreadsheet to facilitate this collective work.